Falling for the Marine (Excerpt) →

Mattie Grant was prepared for anything. Mosquitoes the size of hummingbirds. Fires with all the durability of tissues, drinking water with enough germs to contaminate a small rodent colony.

She could handle all of it. And win.

She had, after all, trained for competing on Survival of the Fittest like she was undertaking a marathon. Reading books, practicing fire building, studying native flora and fauna. She had the art of survival down pat. In a jungle, a woodland, even a cave, she’d be fine.

What she was not prepared for, however, was a lavish mansion with a manicured lawn and a butler waiting at the door.

She parked her Jeep out front and considered the address on the letter she’d received via Speedy Delivery Services that morning. Bowden, her regular delivery man, had waited for her to open the envelope because he knew how much she wanted this chance at the Survival contest. Once he’d seen the look on her face, he’d offered a congratulations, told her good luck and bid her goodbye.

But she didn’t need good luck. She had skill and over her twenty-six years, Mattie had learned skill was what counted, not money, not connections, not beauty. On the field and in the game of life.

She glanced again at the opulent home, sitting like a gem in the early July sunshine. It had to have at least twenty rooms, all behind a stone façade with great white columns flanking the front steps. This was the right street and number, but as far away from what Mattie considered roughing it as life could be.

Maybe she had to do publicity photos first or something? She’d seen CBS pull that on their contestants once. She wouldn’t put it past the Lawford, Indiana network to do the same.

She got out of the car, strode up the granite steps and raised the bronze knocker, lowering it twice against the matching plate. A moment later, an older man wearing a black suit opened the massive eight-foot oak door.

“I’m here for the TV show,” Mattie said, holding up the letter, her voice more question than declaration. This so didn’t feel right.

The butler, tall, slim and gray, didn’t blink. Or even seem to breathe. In fact, if she hadn’t seen his hand twitch a little on the door frame, she’d suspect he was either dead or one of Madame Tussaud’s best. “Right this way, ma’am.” He stepped back and waved her into the house.

“This can’t be right,” Mattie said, entering the ornate marble foyer. A crystal chandelier hung over them, the cut glass reflecting like a constellation in the sudden burst of outdoor light. “I’m here for Survival of the Fittest. This looks more like Day Camp for the Rich.”

The butler merely walked down the hall without answering her. Mattie considered leaving. If this was the right place, though, and it was some kind of trick to throw her off guard before the real Survival contest started, then she might disqualify herself by walking away.

“So, do you have a lot of Girl Scout campouts here?” she asked as she hurried down the hall to catch up, looking around for hidden cameras.

“You know, sitting around the fire, singing “Kumbaya” and eating s’mores? Or is this more the place people go for serious mall withdrawal?”

“Uh, no, ma’am. We have none of that here at the James Estate,” the butler said, without a hint of joke in his voice. He cast a glance over his shoulder at her tennis shoes and khaki shorts, not bothering to hide his look of disdain for her attire. Apparently, guests who weren’t properly clothed weren’t allowed very far into the house because he stopped at the first room on the right, a fancy-dancy parlor well suited for a poodle, and led her inside.

“Please have a seat,” the butler said, gesturing toward an ornate loveseat with some curlicue fabric on it. She knew there was a name for the patterna name she’d never bothered to learn, much to the consternation of her mother, who thought living well was the only way to live.

The butler cleared his throat. Mattie regarded the chair. It looked more like dollhouse furniture than people furniture. Still, the butler seemed convinced it would make a suitable seat.

“Can I take your, ah, bag, ma’am?” He eyed her Lands End backpack with a little confusion. She’d be willing to place odds on the number of people who came into a house like this ready for outdoor adventures.

“I’ll keep it with me, thanks.” On the other network’s show, Mattie had seen what happened to people who made the mistake of giving up their stuff. They ended up stuck on some island in the middle of Central America with nothing while their smarter competitors remained fully equipped. That wasn’t going to happen to her. She intended to win and if that meant keeping her backpack away from the mortician over there, so be it.

She tucked it on the floor beside her feet and lowered herself to the loveseat. No matter what it was called, the chair certainly didn’t hold a lot of love for her rear end. The seat felt stiff, uncomfortable and layered with concrete beneath the fabric. She hoped she wouldn’t be here long. Mattie Grant was about as well suited for an environment like this as a cheetah was for a cat carrier.

The butler backed out of the room, shutting the double doors without a sound. Mattie fished out the letter again from her back pocket. The single piece of stationary from the Lawford television station was simple and to the point, telling her she’d been selected as a contestant on their new reality show. The letter hadn’t been very detailed, which she’d expected. When she’d gone to the tryouts for Survival of the Fittest, the producers had warned her they’d keep as much information secret as possible, but still…

This letter was taking subterfuge to a whole new level. It said little more than “Congratulations on being selected as a contestant on Lawford Channel Ten’s newest reality show” and the address to which she was supposed to report, the mansion, and the day, Tuesday. Nothing else specific at all, except the prize money amount.

“Fifty thousand dollars.” Even aloud, the number sounded huge. She needed that money. She had to win. Even if it meant putting up with this environment for a while before she got to the place where she felt most at homethe great outdoors.

The doors opened again and in walked a man. Okay, not a man. A demi-god. At least six feet tall, he had the dark good looks and deep blue eyes that made grown women trip over themselves in order to get a better look. Sort of a Pierce Brosnan type, only younger.

Mattie figured she could take him. No problem.

A guy like that wouldn’t last long in the woods. He’d be too worried about what gathering a few sticks of kindling would do to his manicure. Good. One competitor she didn’t have to worry about.

“Am I in the right place?” He paused, adjusting his maroon tie.

What kind of guy wore a suit on a survival show? Well, there had been that lawyer on the other network’s show two or three seasons ago. Maybe this guy had some crazy ideas about using his navy Brooks Brothers for a makeshift sleeping bag.

“Depends on where you’re supposed to be,” she said.

“Touché.” He smiled. “I’m sorry. I probably should have started by introducing myself. I’m David Simpson.” He took a step toward her, putting out a hand. “And you are?”

Mattie rose and shook with him, grinning. “Your worst nightmare.”

“Sorry. I’m Mattie Grant.” She broadened her smile. “And I don’t intend to lose this game.”

He grinned. “And neither do I.”

She gave his three-piece suit and polished shoes another glance. “I don’t think you’re quite cut out for this competition.”

“Funny, I was going to say the same thing about you.” He gave her the once-over, his gaze lingering on her shorts and tennis shoes. “Aren’t you a little…underdressed?”

“I’m not here for a beauty pageant. Who cares what I look like?”

He chuckled. “I like you, Mattie Grant. You aren’t what I expected. This is going to be one interesting show,” he said. “Very interesting.” 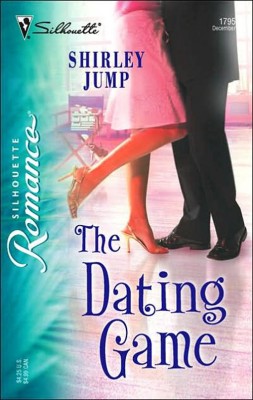 NOW CASTING FOR LOVE AND THE AVERAGE JILL!

The Average Jill: Mattie Grant, who'd trained for a spot on a survival show but instead landed on a dating show. Mattie had never backed down from a challenge, not even one as good-looking as Bachelor #1. Really, how hard could a dating game be?

Falling for the Marine (Excerpt) →