The Homecoming Queen Gets Her Man (Excerpt)

…This was where Meri fit in, where she could breathe. This hardscrabble section of town, where people let their lawns get overgrown and left bikes in the front yard and didn’t care if someone forgot a glass on the coffee table. She parked in Grandpa Ray’s stone driveway, kicked off the heels and switched them for the flip-flops she kept stowed under the passenger seat, and got out of the car. She swooped her hair up into a ponytail as she walked, and by the time she reached the porch, Meri felt like herself.

For half a second, Meri expected her cousin Eli to come loping down the street, with his ready smile and another one of his corny jokes. But as she gazed at the empty blacktop, the truth hit her again like a brick. Eli was dead. He had died in the war, on some dusty road in Afghanistan, and he wasn’t coming back. Not now, not ever.
But his spirit was still here, in the clapboard houses and the big green trees and the happy birds chirping from their perches. In the trees he had planted years ago, the windows he’d helped Grandpa install, the gazebo he’d spent an entire winter building. Eli would have wanted Meri to be happy, to enjoy the day, whether it was short or long, and to never let her grief stew.

And she was going to try her best to do just that.

Meri charged up the bowed front steps and banged on the screen door. “Grandpa? It’s Meri!”

No response. She called again, but got only silence. Her stomach lurched. Was Grandpa sick? Had he passed out? Or…

She heard a sound from behind the house, and the fear and worry ebbed. She hurried down the steps, skirted the paint-weary
house, ducking under the Spanish moss hanging from an oak tree, a genuine, light smile already on her face before she rounded the last corner.

“Grandpa Ray, you silly man,” she said with half a laugh, “Don’t tell me you’re already ignoring the doctor’s—”

The words died in her throat. Her gaze skipped past her grandfather, napping in the Adirondack chair, and stopped when she saw the only man in Stone Gap she never wanted to see again.

He stood there, a hundred feet from her grandpa, with an ax in one hand and a pile of chopped wood at his feet. He wore an old hunting cap, the camouflage brim tugged down over his short dark hair. His khaki shorts looked as if they’d been through a shredder, and his concert T-shirt was so faded that only the letters R and H showed, but still—

He looked good. She hated that he looked so…grown-up and confident and strong. And sexy. The Jack she remembered had been a gawky teenager just growing into his height. He’d headed out to boot camp, then on to the Middle East, and come back—

With the body of a Greek god.

He arched a brow in her direction and she cut her gaze away. Damn. He’d caught her staring.

Jack put down the ax, wiped the sawdust off his hands, then crossed to her. He’d gotten taller, leaner, more defined, and her traitor stomach did a funny little flip when he closed the gap between them. “Figured it was only a matter of time before trouble showed up,” he said.

He grinned, that lopsided smile that had once melted her heart. It didn’t have one bit of impact on her now. Not one bit. “Glad to see you haven’t changed.”

She raised her chin. “I’ve changed, Jack Barlow. More than you know.”

His gaze lit on the scar swooping along her cheek. Her heart clutched and she held her breath. Something haunted his eyes, something darker, edgier, different than anything she had ever seen before. For a second she felt a tether extend between them. Then his gaze jerked away and the connection flitted off with the summer breeze.

“Some things will never be the same, will they?” She thought of her cousin, who had gone off to war a little after Jack did, tagging along with his best friend, just as he had when they’d been little and he’d
followed Jack to the creek, the lake, whatever adventure the day had in store.

Two had left. One had returned.

Did that thought break Jack’s heart as much as her own? They’d been inseparable as kids, trouble triplets, her grandmother used to say with a smile. Not having Eli here was like missing a limb.
“I’ve got work to do.” Jack picked up the ax and went back to the pile of wood. He swung the metal into the stumps with furious whacks, and kept his back to her, wearing that look of concentration that she knew as well as she knew her own eyes. Message clear: conversation over and done.
One thing was sure—the charming Jack Barlow she had known in high school was gone. There was something about this new Jack, something dark, that she didn’t recognize. Was it because of what he’d gone through in the military? Was it the loss of Eli, who had been a best friend to both of them for so many years?
Either way, the turned back and the clipped notes in Jack’s voice threw up a big no-trespassing sign, one Meri intended to honor. She was here for her grandfather, not to solve decade-old mysteries. And definitely not to get involved again with the guy who had seen her as nothing more than a vapid, pretty face.

She strode across the lawn and bent down by her grandfather’s chair. Meri pressed a kiss to his soft cheek, trying to hide her alarm at how thin, how pale, how frail her once hearty grandfather had gotten. He seemed to be shrinking into himself, this once robust man who used to carry her on his shoulders.

His eyes fluttered open, then he smiled and grasped her hand with his own. Joy shone in his pale green eyes, gave his wan face a spark of color beneath his short white hair. Behind him, the vast Stone
Gap Lake sparkled and danced the sun’s reflections off Grandpa Ray’s features. “Merry Girl,” he said, stroking his palm tenderly against her scar, a momentary touch filled with love. “You’re here. How’s my favorite granddaughter?”

“Sassy and smart, as always.”

He laughed. “You know what tames sassy?”

“Sugar,” she replied to the familiar dialogue.

Every time he’d seen her, for as long as Meri could remember, Grandpa Ray had asked her the same question and she’d given the same replies. The exchange always ended with the same sweet reward—a handful of miniature chocolate bars.

He gave her a wink and a nod. “I still have a bowl full of candies on the dining room table, waiting just for you.” He grinned. “And Jack, if you care to share.”

She wasn’t sharing anything with Jack Barlow. Not now, not in the future. He was a complication she hadn’t expected, but a complication she could surely avoid.
“Me? Share chocolate? Grandpa, you forget who you’re talking to.” Behind her, she could hear the steady whoosh-thwap-thud of Jack’s ax splitting wood. Jack was here, helping her grandfather, something he had done for as long as she could remember. Back when they were kids, it had been Jack and Eli, spending their hours after school and weekends helping Grandpa Ray, then dashing into the lake to wash away the sawdust and sweat. For all the heartbreak Jack Barlow had brought to her life, he’d brought something very good to her grandfather’s and
for that, she was grateful. That little flutter earlier—all due to being surprised at seeing him, nothing more.

Last she’d heard, he was still in the military, fighting overseas. But judging by his appearance here and the buzz cut that was growing out he was no longer the property of the US government. Not that she cared. At all. Then why did her mind keep reaching back to that moment in Gator’s Garage? The painful months after their breakup when she’d tried to forget Jack Barlow and his lopsided grin?

Whoosh-thwap-thud. Whoosh-thwap-thud.
Given the fast and furious pace Jack was attacking the wood, maybe she wasn’t the only one trying to pretend that running into each other meant nothing.

Meri blew out a breath and dismissed the thought. Jack Barlow was in her past, the last place Meri wanted to visit. “After this morning, I could use every last chocolate in that bowl, Grandpa.”

“I thought she might have changed. But…” Meri shook her head. She’d done her daughterly duty and gone to Anna Lee’s house. That was enough. “Anyway, I’m not here to talk about her. I want to talk about how you’re doing.”

“I’m still warming a seat.” He grinned. “That’s all I’m asking from the Lord these days.”

Her chest tightened, and she felt tears burn the back of her eyes, but she blinked them away and gave Grandpa Ray a smile. She perched on the edge of the opposite chair and took his hands in hers. “I’ll be here, as long as you want.”

“I’d like that, Merry Girl.” His voice wavered a bit and his hand tightened on hers. “I’d like that very much.”

She sat back against the chair, turning her face to the North Carolina sun. It warmed her in a way nothing else ever had or ever would. Here, in the backyard of this run-down little bungalow, among the trees and grass and birds, she was home, at peace. Here, she could breathe, for the first time in a long, long time. “Me too, Grandpa. Me too.”

Then she heard the whoosh-thwap-thud again. Her gaze traveled back to Jack, down the muscles rippling along his back and shoulders, and the flutter returned.

Finding peace was going to be a lot harder than she’d expected. 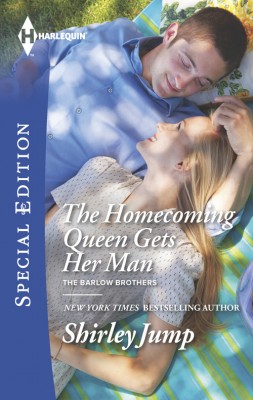 The Homecoming Queen Gets Her Man

Roll out the red carpet—Meri's back in town! But how could the jean-clad beauty fishing for crawdads be Stone Gap's every-blond-hair-in-place princess? It seems the former Miss North Carolina has had it with pageants and perfection. Meri's home to care for her ailing grandpa and realize her dream of becoming a photographer. If she could just ignore her treacherous heart when she gets her first gander at her gorgeous, all-grown-up first love…