Molly Hunter stared for a good thirty seconds at the long white stick blaring its message like a beacon atop her peach tile bathroom counter. Put it down, picked it up, stared at the double pink message some more.

It couldn’t be. Had to be…impossible.

Nausea sent her stomach on a renewed roll and pitch, as if daring her to disagree. For the past couple of weeks, she’d been waking up nauseous, tired, but with three of her summer school students out sick over the last month with the flu, she’d attributed her touchy stomach to them. Not to—

Oh God. To that night in Vegas.

Two months ago. Had it been that long? How could she not have noticed?

Easy. She didn’t have a boyfriend, or a husband, and the chances of her getting pregnant were slim to none. Except this time, Slim had apparently been an overachiever.

Her mind rocketed back to the bar, to a gorgeous man with blue eyes, and dark hair. A man she knew only by his first name.

One crazy, insane night when Molly Hunter, who never did anything without a plan, without thinking things through, had thrown caution to the wind, and let a nearly electric attraction rule her every thought.

Ever since that night, she’d done her best to try to forget the intoxicating man she’d met in Vegas, and she’d thought she’d done a pretty good job of it. He’d been a momentary attraction, a crazy aberration in her life, and even though every once in a while her thoughts drifted to where he might be or whether he was thinking about her, she told herself leaving that one-night stand where it was—in the back of her thoughts as a delicious one-night memory—was the best thing all around.

After all, she was a kindergarten teacher, who did nothing more exciting than teach remedial English to high schoolers in the summer. A conservative woman in every sense of the word. She never did anything remotely like that.

She’d gone to Vegas with one purpose—to help her good friend Jayne Cavendish forget about the devastating end of her engagement to Rich Strickland. The four of them—Molly, Jayne, Alex Lowell and Serena Warren—had planned a girls’ weekend of manicures, martinis and memories.

They’d done just that the first night, but then the second night, they’d been more adventurous, going off in their own directions. For some of them, that time apart had clearly resulted in a bit of trouble.

For Molly—a lot of trouble. She gave the stick a solid shake, then looked at it again. Still two pink lines.

Yeah, and totally not prepared for this life changing event, her mind shouted back. 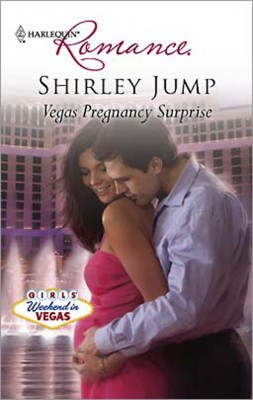 Molly Hunter's always dreamed of finding Mr. Right and having a family. But Mr. Right's in another city--and he's certainly not expecting to be a dad!