Olivia Linscott made the most insane decision of her life in less time than it took to microwave a burrito. Before she could think twice, or worse, hesitate, she’d packed what remained of her belongings into her car, loaded up on gas and 5-Hour Energy drinks, then ditched her life in Massachusetts and headed south.

All because a lawyer had shown up on her doorstep with a mysterious will, a crinkled photograph, and a butterfly necklace. Olivia’s heritage, reduced to a nine-by-twelve manila envelope.

Now, forty-eight hours later, she was in sunshine instead of snow, catching the scent of ocean instead of exhaust. Outside the Toyota’s window, the Florida coastline curved like a lazy snake, an undulating ribbon of blue-green punctuated by soaring seagulls and cresting whitecaps. It was a million miles away—and a good burst of salty, fresh air—from the choked, congested streets of Boston, where cars played Frogger with each other and dodged potholes the size of small elephants. Down here, Olivia could breathe, really breathe, in more ways than one.

She pressed the speed-dial button on her cell and waited for the call to connect. When her mother answered with her familiar chirpy hello, a wave of homesickness crashed over Olivia, and for a second she had the urge to turn around, to head back to everything familiar.

“Olivia! I’ve been waiting for you to call,” her mother said. “How far are you now?”

“Only another mile or so to go.” Olivia nestled the cell against her ear. “I’ve been ready to crawl out of my skin for the last five miles, just dying to get there already. Maybe I should pull a Boston and put the pedal to the metal the rest of the way.”

“Olivia Jean, if you do, I’ll fly down there and take away your car keys,” her mother said, with the same tone she’d used when Olivia had been little and trying to raid the cookie jar before dinner. “Even if you are over thirty.”

Olivia laughed. “Okay, okay. I’ll keep it to twenty miles over the speed limit, like any respectable Massachusetts driver.” On her left, a half-dozen bright, happy shops lined a wide boardwalk, across the street from the beach. A white-and-pink awning fronted the Rescue Bay Ice Cream Stand, a quaint little place with umbrella-covered tables and a giant plastic cow sporting a bright pink bow. An elderly couple enjoying swirled cones—one chocolate, one vanilla—raised a hand in greeting as Olivia drove past. She returned an awkward wave, just as a man walking his dog raised his hand in greeting and a shopkeeper sweeping the walk did the same. The instant welcoming atmosphere gave Olivia pause. It wasn’t that Bostonians were frigid, exactly, but rather less overt in being neighborly.

There was something . . . warm about this town, something Olivia had liked the second she arrived. “Ma, you should see this place. It’s like another planet.”

“Well, we’re still stuck on planet Arctic here. It’s too darn cold to even look out the window, never mind go anywhere.” Anna Linscott was no doubt bundled up by the fireplace in her Back Bay townhome. Olivia could see her now, sitting in the threadbare rose-patterned armchair Anna had owned since the day she got married, the blue-and-green afghan Nana Linscott had crocheted draped across her lap. “There was a ring around the moon last night. A storm is coming. I’m thinking three inches, maybe
four.”

Anna laughed. “True. But if I see a ladybug—”

“And she lands on your hand, spring is on its way.” Olivia grinned at her mother’s superstitious weather predicting. Half the time, Anna was more accurate than the guys at Channel 7, so maybe there was something to her folklore. Olivia glanced out the window again, drawing in another deep breath of balmy air. “This is bliss. Palm trees and beaches and—”

“They won’t bother you if you don’t bother them.” Olivia fingered the picture taped to her dash. A perfect Florida bungalow, painted in sherbet colors of pale yellow and soft salmon, trimmed in white, nestled in the middle of a neat yard, flanked by rows of blooming annuals and fruit-laden citrus trees. “Mom, do you think I’m doing the right thing?”

“I think you have to do this.” Anna sighed, a mixture of support and worry. “Then maybe you’ll finally have the answers you need, and deserve.”

Olivia’s finger danced across the picture again. Would she? All her life, Olivia had felt like a lock without the right key, a puzzle missing a piece. Now, maybe here, she’d find what she was searching for.

And if not, she’d at least get one hell of a tan.

“Darn,” her mother said. “Your dad’s beeping in. I sent him to the grocery store. By himself.”

Olivia laughed. “Say no more. I’ll hold.” She glanced again at the photo on the dash, then up at the GPS. Distance remaining: 0.9 miles. Butterflies danced in her stomach.

When the lawyer had rung her doorbell last week, Olivia insisted he must have had the wrong address, the wrong Olivia Linscott, and the wrong will in his hands. Did she have any relatives in Florida, he’d asked, and she’d said no. Everyone in her little family lived in Boston, and always had. They’d practically come over on the Mayflower, as Aunt Bessie said. No one moved away, except crazy cousin George, who went to Alaska to marry an Inuit woman he’d met at a Trekkie convention. Olivia had seen the pictures of their Enterprise-themed wedding. Quite inventive, considering they’d held it outdoors. In February.

Then the lawyer had asked if she knew the identity of her biological mother, and Olivia’s world flipped upside down. Her mother. The woman who had given birth, then walked out of Brigham and Women’s Hospital, leaving her newborn daughter behind.

A woman who’d never contacted her, never done so much as send a Christmas card.

A woman who had left her property in Florida, a porcelain necklace, and not much else. There’d been no letter, no explanations. No idea of who Bridget Tuttle had been.

Or why she’d abandoned her baby.

All her life, Olivia had wanted to know why. She’d toyed with searching for her biological mother on the Internet, then drawn back at the last minute, afraid the answers might not be ones she wanted to hear. And now, that door to a personal connection, a face-to-face, was closed. Forever.

She swallowed hard and pressed a finger to the photo again. Her only link to Bridget Tuttle remained in this piece of property and the town of Rescue Bay. Someone here had to have known her mother and would be able to fill in the blanks that now gaped like black holes.

Maybe this desperate need to know stemmed from all the changes over the last year. Maybe it was finally having a tangible reminder of someone who had been, up till now, a mythical figure. A ghost, really.

Olivia had prodded the lawyer for more information, but he’d said he was merely the messenger, a Boston attorney hired by the Florida probate, and knew less than she did. He handed her the deed, along with the picture of the house and an envelope with the necklace, then wished her good luck.

She’d stood there for a long time, staring at that picture, before making the most impulsive decision of her life. Just . . . go. 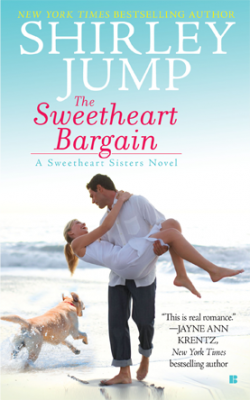